Every three months or so, I must contact my neurologist at Kasih Ibu Hospital in order to obtain a new prescription for a med called Pregabalin, or rather the doctor's adjustment of a basic Pregabalin formula to best suit my particular complaint, which is of a feeling of intense inner heat from my chest to the top of my head. This is experienced, according to the doctor, by roughly 20 percent of people having an autoimmune disease, and of course it is not truly 'heat', but just a messed up response to who knows what from the central nervous system.

Anyway, this will seem strange to Americans, who get their prescription refills quite simply through communication between their doctor's office and the patient's preferred pharmacy. Not so in Indonesia. Here I must contact both my doctor and the ER. The ER then sends a message to the doctor and the doctor sends a new prescription to the ER. I will then be informed when the ER has received the new prescription, at which time I must drive to the hospital, pick up the prescription, and take it to a local pharmacy (I could get at the hospital, but the price would be nearly double that of the pharmacy).

But what happens when the doctor fails to communicate with the folks in the ER? That's what I found out a few weeks ago when I tried to reorder the Rx as usual. No communication between the doctor and the ER. In fact, the doctor did not even read my message, nor did he read the next two that I sent. Calling the ER availed me nothing, as they simply stated that the doctor had not replied to their request. Uh yeah, I know that.

So I ran out of the medication, and sure enough began to suffer the daily onslaught of the old symptom. Being on fire at the core of one's being does not do much for the mood, and so it happened ultimately that I found no other option than to go to the hospital myself, storm into the ER, slap the old Rx down on the counter and exclaim "Aku mau resep ini, sekarang juga!" Which means 'I want this prescription NOW!'

Well, suddenly they were able to do something about it. A nurse scurried to the doctor's office, one short hall away, and returned forthwith with the written prescription.

Happily, the doc gives me three months, more or less, worth of these pills (which is really nice of him). I do worry, however, that the same thing will happen next time around, as I see on my phone that he has STILL not read my messages. Lol.

One thing is for sure--I'm gonna contact him plenty early next time I'm running low on the pills, and then just make another appearance if I'm receiving no reply.

Late at night the night before last I jotted the following down on my phone, then completely forgot about it. Discovered it again just now, for what it's worth:

Life never stops because it is never fully lived.

Desire never stops because it is never fully satisfied.

Love never stops because it is never fully attained.

The body grows old but these three--life, desire, love--never age. They are born always new, again and again.

Eat, Drink and be Merry

We read in the Sanur Weekly this week that 42 countries are now eligible for visa on arrival in Bali, including America. Things are gearing up. Additionally, quarantine requirements are scheduled to be dropped altogether for Bali.

A "Rain Shaman", hired by the government to suppress rains during the Mandalika Race Circuit in Lombok, has apparently failed miserably in chasing away the torrential rains, although the shaman herself insists that she intended for it to rain so that the track could be cleaned.

An Australian national has been detained after immigration officers discovered that the man had overstayed his visa for eight years, having first entered Bali back in 2014. He now faces a jail sentence before being deported and most probably blacklisted for life.

In another case of catch-me-if-you-can, a Nigerian national has been arrested after having overstayed his visa for two years. He is also set for deportation.

During this past week, I enjoyed the company of my friend from the Jogyakarta area, wherein it might be said that we became more than friends and yet not more than that. If you know what I mean. I was able as well during her visit to gauge the differences in my condition and capabilities between, say, a year ago and the present time. It became clear, in short, that I can no longer walk any considerable distance before experiencing disabling pain in my back and breakdown of motor movement in my leg muscles, thus causing me to stumble about drunkenly and lean on the poor girl like a crutch. Decidedly less than attractive, I reckon, but she didn't seem to mind. On the bright side, my ramshackle condition earned me a couple long massages, so I guess there's something to be said for being a cripple.

Other than that, we had pleasant visits to various beaches, including Padang Galak, which I have not visited in some years, a couple of dinners out together, a couple of home cooked meals (compliments of her daughter) out at her kost-kostan, and just generally delightful chats and an easygoing time together.

I find myself readjusting now to the usual drill, my usual abundance of alone time and my predictable daily schedule. We will not often see each other, will my friend and I, given the particulars of our separate and very different life situations, not to mention our distant locations. Seize the day, I guess, is the applicable notion here. Eat, drink and be merry, for tomorrow we die.

I guess another part of the usual routine is writing here, which this evening has led me to the discovery, or the rediscovery, I suppose, that I really can't write worth a damn anymore, and for this I apologize.

As we enter the month of March, Bali continues to inch closer to normalcy. Inch by inch. By mid March, it is forecast, quarantine for international travelers will no longer be imposed, although individuals will be required to take two swab tests during their stay on the island.

A number of international airlines are continuing to schedule flights to Bali.

Children are being sent back to school, then pulled out, then sent back again. It's a work in progress ;)

In other news, a young Balinese couple were recently arrested for having sex in a public park in Denpasar. This sort of thing is illegal here. Sadly, the young folks are now facing up to two and a half years in jail. And ironically, the police officers making the arrest have themselves been arrested for recording the event on video and posting it on the internet. Sheesh. They face the same jail time.

As for myself, I got through Nyepi Day as usual. Happily, they did not turn off internet access, so most of the day was spent watching Netflix (Ozark) and YouTube (US news). On the evening of Nyepi, a major thunder and lightning storm thrashed the island, and so that was entertaining--being made the more spectacular yet for the absence of any artificial light whatsoever. So this is what lightning looked like in ancient times! 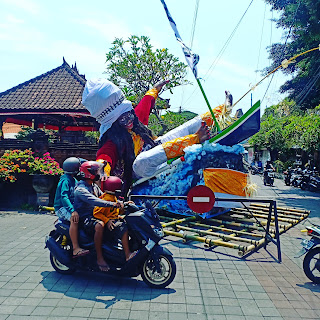 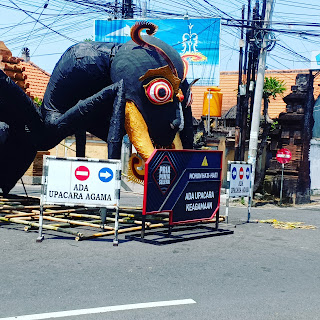 Snapped these two pics today of floats waiting for the start of the annual Ogoh-Ogoh parade. Actually, it hasn't been annual for the past two years due to COVID, but it's back now. Good to see it return. This parade occurs on the evening before Nyepi Day, the Balinese day of silence. Cannot leave the house, cannot use electric lighting, cannot make noise until 6 am on the day after Nyepi. So I've bought plenty of snacks and have candles at ready, and I'm hoping that they will not cut off internet service this year, as they sometimes have done in the past.