Is The Doctor In?

Getting ready to head out for coffee this morning required four trips to and from the motorbike as I forgot one thing after another. Of course on each trip to the bike, I had locked the door behind me, so I had to let myself in again. On the fourth trip, it was my mask I came back to get. Yet where was it? Not on the bookcase, where I always put it. Where could it have gotten to? Nowhere on the bookcase. Maybe in my purse? Nope, returning to my bike, reopening the seat, rummaging through the purse turned up no mask. Reentering the house, I searched out an old mask, kept in a pile of old masks under my hats (just in case), reached up to put the mask on my face and ... well I'll be darned, my mask is already on my face! Mystery solved.

Not such a promising start to the day, but it did provide me with a laugh.

I may or may not have mentioned the troubles I had with obtaining a new prescription recently from Dr. Yoanes, my neurologist at Kasih Ibu Hospital. Thankfully, the doctor gives me 90 capsules on each occasion, and generally I take only one a day, so that part of the scheme works out pretty well. It's getting the refill that is always problematic for some reason.

Last time around the problem was simply that he was not reading his messages. You see, when I need the prescription, I am to send a message to Dr. Yoanes and also to the ER. The doctor will then send the prescription to them, I will pick up the prescription in the ER, and then take it to a pharmacy recommended by the hospital because the hospital price is much higher than the price in this pharmacy. Confusing, I know, but that's how it's done here.

Now on this recent occasion, I started out early with attempting to renew the prescription, only to find that the doctor was on vacation. Upon returning from vacation some days later, he wrote a prescription for me and sent it to the ER. I picked up the envelope with the prescription in it and proceeded to the pharmacy. My mistake was in failing to examine the prescription first. I realized only a couple days later that 1) the medicine was not very effective and 2) one ingredient was missing from the three that are supposed to be in this prescription.

I sent a message to the doctor, pointing out the mistake he had made.

The fault is yours, he answered. You need to update your records.

I? I need to update the record? What kind of hospital is this?

I used the prescription on your record, the doctor wrote.

Oh well, I'll live with it, I thought. But after two days, I concluded that I could not live with it. I needed that one ingredient that was missing! The magic ingredient. The one that makes the medication actually do something helpful.

Ya what? Which one? And when? Or are you just saying that you can but you don't want to?

I ask the doctor to elaborate a little, and he elaborates by saying: "Saya masih d saba".

I look up the word in Indonesian. There is no word. I look it up in Balinese. It is not Balinese. As a final effort, I type it into Google, and Google produces the information that Saba is a secluded resort in the jungle.

So I got the damn medication today. Again. And double checked this time.

In the meantime, I had described my troubles to my friend, Eveline, in Jogyakarta, and she suggested that she could check with her neurologist there and see if he could prescribe just the missing ingredient (which, btw, is amitriptyline).

"Oh, it's by prescription only," I said.

"Well, let me try anyway. No harm in trying."

Later on, she called from her doctor's office and said "How many do you want? Fifty? One hundred?"

"Yeah, it's no problem. I can get them here and bring them there. (She is coming here to Bali anyway on the 25th).

Well how about that. That's the way it is in Indonesia. By prescription only here. No problem in Jogya.

Plus, she is a personal friend of the doctor's.

So as it turns out, at the end of some considerable though usual trouble, I'm all set, and more.

Nonetheless, Dr. Yoanes tells me, via the ER staff, that I must see him before he will prescribe again. Which I guess is reasonable. As far as I can remember, I haven't actually seen the man in three years or so. I will just need to find out when he is in his office and when he is in the jungle.

Gosh, if Eveline could somehow get Vicodin as well, I'd be a happy man indeed. But that's not gonna happen. Vicodin, being a narcotic, is illegal in Indonesia. 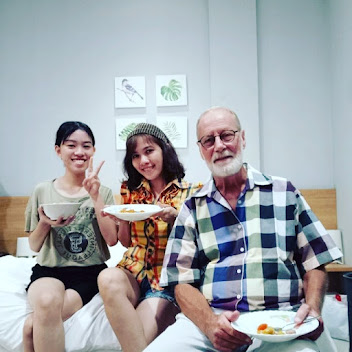